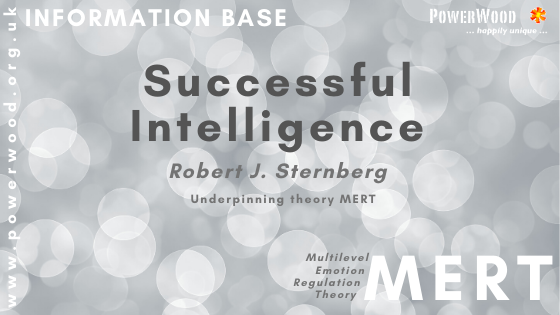 From The Theory of Successful Intelligence to what now is called the Triarchic theory of intelligence is one of the underpinning theories of the Authentic Communication Model (ACM) which is one of the main concepts of the holistic Multilevel Emotion Regulation Theory (MERT) developed by Simone de Hoogh for (more)able neurodiverse children, teens and (young) adults.

The parts of intelligence

A successfully intelligent person accomplishes these goals by figuring out his or her strengths and weaknesses, and then by capitalizing on the strengths and correcting or compensating for the weaknesses. Strengths and weaknesses are in terms of four kinds of skills: creative, analytical, practical, and wisdom-based. In particular, the individual needs to be creative in order to generate novel and useful ideas; analytical to ascertain that the ideas he/she has (and that others have) are good ones; practical in order to apply those ideas and convince others of their value; and wise in order to ensure that implementation of the ideas will help ensure a common good through the mediation of positive ethical principles. (Source)

What makes us intelligent?

Practical or contextual Intelligence, is our ability to translate analytical insights and creative expressions into a form that helps to adept to the environment or form it in such a way that it helps us to achieve our own chosen goals in life. Through the three processes of adaptation, shaping, and selection, individuals create an ideal fit between themselves and their environment. This type of intelligence is often referred to as “street smarts.”
PowerWood’s Authentic Communication Model (ACM), part of the Multilevel Emotion Regulation Theory (MERT), is a very helpful tool in how to effectively communicate with one self and others, is partly inspired on this Theory.

Wisdom (or our emotional intelligence) is our ability to know when to apply which ability to achieve our goals in our own community. While ensuring that our ideas will help enrich our community and even the world we live in as an empowering, respectful and responsible contribution according to our personal and communal norms and values.