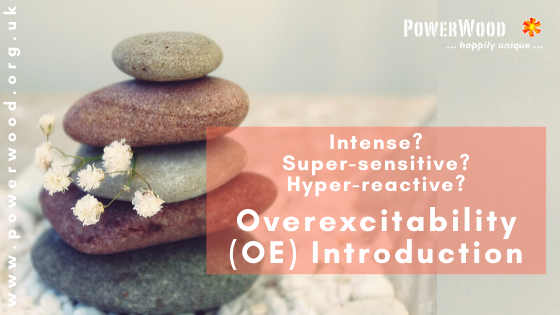 Exploring OverExcitability – E-Book FREE when a member, read about: 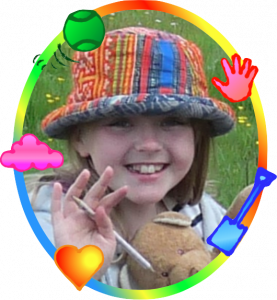 “I feel much more fondly towards ‘overexcitability’ (OE) as a term after the workshop because you [Simone de Hoogh] have given it a different meaning for me. Before I discovered PowerWood, it was in the same compartment of my head as Marge Simpson reading her “Fretful Mother” magazine. That always makes me laugh so much, but there is a more serious side. I heard about PowerWood last year and although I automatically felt how relevant that would be to me and my family, I pulled myself away from my fascination as I didn’t want to be that fretful mother, and I didn’t yet have another way of perceiving overexcitability or a community supporting it’. I hadn’t seen the website yet… Hooray I got there!” Mum of 2 children

‘Overexcitability’ (OE) Is the term coined by Kazimierz Dabrowski (1902-1980), a Polish psychologist and psychiatrist who moved to the USA after the Second World War. The combined traits of intensity, (hyper) sensitivity and ‘super stimulatability’ is referred to as OE; an innate ability to react more strongly to sensory stimuli.

This heightened ability to respond to stimuli is part of a group of traits that Dabrowski called development potential: the ability and drive to make the world a better place for everyone.

OE manifests as increased sensitivity, awareness and intensity, and makes a real difference to how life is experienced. Children and adults who have OE experience the world as deeper and more vivid, acutely sensed, complex and richly textured. This positive personality trait might come with the deep urge to make the world a better place for everyone.

“Children with OE’s might be seen as over-sensitive, and can easily become over-whelmed and over-excited. They may be nervous or shy, or they may show strong emotional reactions,” explains Simone. “Their behaviour may be inappropriate or challenging and they are frequently misunderstood which is why they often feel out of place.”

Dabrowski identified five areas of intensity: Psychomotor, Sensual, Intellectual, Imaginational and Emotional.  You can read more about each OE, how they are expressed and how they might influence you or your child’s experiences and behaviour by clicking on the appropriate link. A person may possess aspects of one or more of these. It is not so much about ticking all the boxes but about how intensely they are experienced by you or your child. 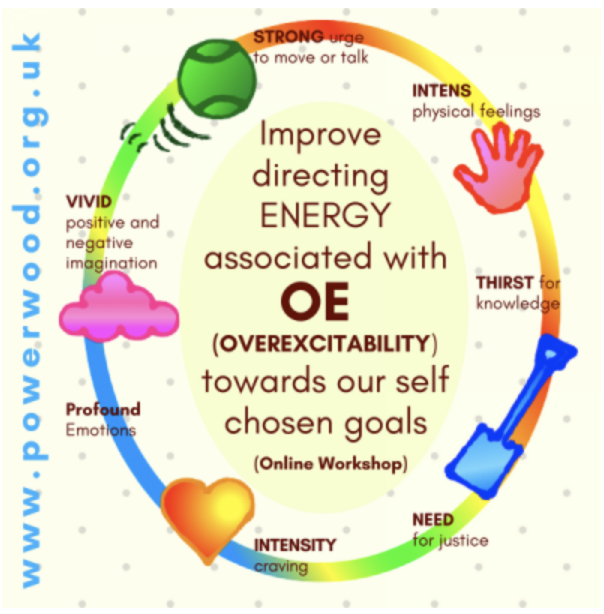 Dabrowski’s research focused primarily on rare individuals in a population who he considered displayed exceptional personality development.
Dabrowski’s hypothesis was that sufficient and significant developmental potential created internal conflicts, psycho-neuroses — that led to positive disintegration — essentially breakdown of the individuals existing psychological structure allowing him or her to subsequently take a more active role in self-development and self-insight, culminating in the self-creation of an individualised personality.

Dabrowski did very limited research on high able children (less than 200 children) but found that they exhibited signs of psycho-neuroses and his hypothesis was that they would, therefore, be prone to experiencing positive disintegration. – the presence of OE creates an internal conflict that pushes growth forward in individuals – high able or not. A hypothesis that has never been tested (Tillier, 2009).

Pyryt (2008) concluded that high-able and average ability individuals have similar amounts of emotional OE, the absence of which limits developmental potential.
Lind (2001) emphasises the joy OE’s can bring to the highly able child.

Dabrowski’s theory of positive disintegration can help children, teenagers and adults with sufficient and significant developmental potential to understand that going through deep personal turmoil is a step towards a more developed level, making the ‘disintegration’ positive, and can motivate them to see their current situation as necessary for personal growth (Silverman, 2000). Read more about the five areas of intensity: Psychomotor, Sensual, Intellectual, Imaginational and Emotional.

Blog posts by Lucinda Leo:
What are Overexcitabilities
How I discovered that OEs aren’t something that needs fixing
How I found the Secret Key to Understanding My Sensitive and Intense Family

If you want to read more about Kazimierz Dabrowski, the Polish psychiatrist and psychologist, and his Theory of Positive Disintegration (TPD), a novel approach to personality development, of which OE’s are only a small part, go to  The Theory of Positive Disintegration website run by Bill Tillier, who is a former pupil of Dabrowski and in charge of Dabrowski’s legacy, offering a wealth of information.

The organisation SENG supports gifted and talented individuals. SENG considers that intensity, sensitivity and overexcitability are primary characteristics of the highly gifted. Read the article by Sharon Lind ‘Overexcitability and the Gifted‘