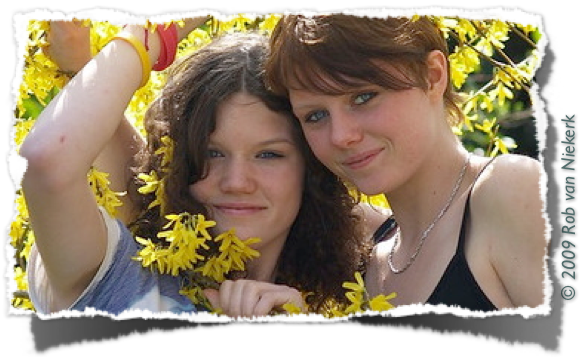 More-able neurodiverse children, teenagers and adults need a perspective in which they can see their own experiences, their inner world, highs and lows reflected, their here and now and their dreams.

What do we need?

Dabrowski (1970) has developed a deep lived through, meaningful and well founded perspective and theory: Theory of Positive Disintegration (TPD), that is seen as the driving force in the social and emotional area of giftedness (Mendaglio, 2008).
Dabrowski has become a very common reference in the gifted area. Theory of Positive Disintegration (TPD) receives growing attention and becomes subject of research (Yakmaci-Gu:zel, 2002; Mendaglio, 2008; Daniels & Piechowski, 2009; Kaaij & Mink, 2009; White, 2007). In new handbooks on giftedness, Dabrowski’s theory became a chapter (Jackson, Moyle, Piechowski, 2009) or he is the least mentioned (Pfeiffer, 2008).

How does it Help Teens?

Dabrowski’s Theory of Positive Disintegration (TPD)(1970) can make it possible for teenagers to find a path back to their strengths, to re-discover a place of security within from which to move forward with promise into their adult lives. They can be assured it is all right to want to use those strengths for the better of humankind.
Teenagers can experience that within this theory their intense feelings, negative or positive, are acknowledged and appreciated and they may start to see possibilities again to build for themselves a meaningful life based on their, now permitted, own norms and values.

The knowledge about Dabrowski’s theory can spontaneously ignite an autonomous personal growth process, called ‘autopsychotherapy’ in teenagers and also adults.
The theory doesn’t give direct answers but gives a holistic perspective with a higher aim that helps gifted individuals to understand their own position in the world and makes them able to see an individual meaningful path that they often spontaneously develop further. The Theory of Positive Disintegration can be a guiding principle in their further/remaining lives.

For Teachers, Parents and Carers

Whenever Parents and teachers hear about the theory, their interest is immediately piqued.
To teachers, parents and carers it can give insights and tools to understand children and teenagers (and for parents often themselves)  to blaze a new trail together.
Knowledge about Dabrowski’s theories generates comprehension of teachers, parents and carers for gifted children and teenagers and makes them better equipped to guide them towards a fulfilling life.
For example:  to realise that suppressed OverExcitabilities can come out in disturbing behaviour can be clarifying and motivating to parents and teachers.
Dabrowki’s theory makes it sometimes possible to recognise gifted and talented children and teenagers outside the normal IQ paths, making it possible to sometimes detect gifted underachievers.

Theory of Positive Disintegration (TPD) is:

How does it Work?

According to Dabrowski’s TPD, also called the personality theory of the 21st century (Sal Mendaglio, 2008) development happens from low to high through positive disintegration.

TPD is a theory of personality development in which are distinguished five levels, they are not stages: not every human goes through all levels.

Dabrowski worked in his life with many highly gifted individuals.  gifted individuals have what he calls “developmental potential”, which is a condition but not a guarantee for further growth. Only the great of the earth achieve the highest level. 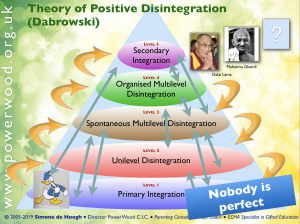 Dabrowski distinguished five OverExcitabilities (OE)  among the gifted: psychomotor, sensual, intellectual, imaginative and emotional channel, for all five channels he tells how they are expressed.
Not all gifted persons have all five overexcited abilities, but to have intellectual, imaginative and emotional overexcitability is an asset to developmental potential.

Dabrowski saw ‘autopsychotherapy’ as developing yourself towards internal and external harmony and to become a better human being.
He spoke about dynamisms, driving internal forces, like shame and guilt, that activate and accelerate growth.
Compared to everyday shame known to all, at a higher level, shame can be felt when one is not yet being able to live up to one’s own ideal self-image.
Besides the dynamisms Dabrowski also described the fifty so-called functions, feelings, that have at every level another content, he speaks then of ‘multilevelness’.

For example in ‘Justice’ he distinguishes the five levels as follows:

“In TPD [Theory of Positive Disintegration],  development is equated with becoming truly human, a state accomplished by individuals who struggle to make sense of themselves and society. In the process, they transform themselves from self-serving human animals to altruistic human beings ” Sal Mendaglio (2008)

Multilevel Emotion Regulation Theory (MERT) is a holistic theory developed by  Simone de Hoogh.  The theory explains how more-able neurodiverse (young) individuals and parents of neurodiverse children can develop emotional regulation skills and direct their energy towards self-chosen goals, and contribute to society.