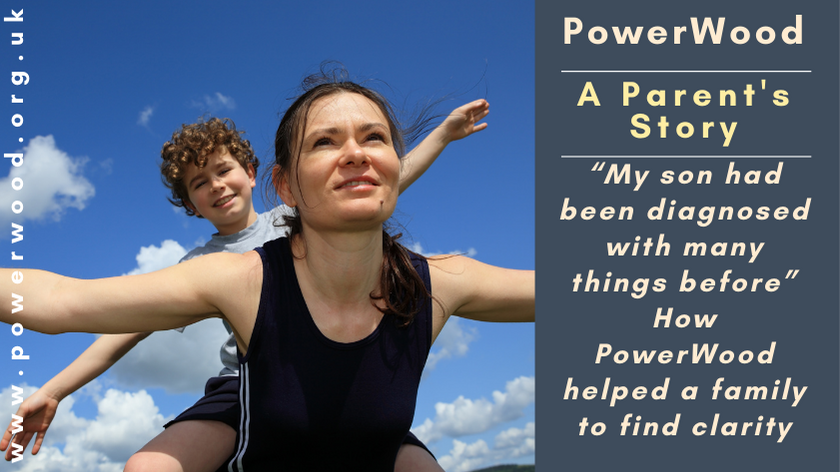 I first contacted PowerWood to try to make sense of my extremely complex son. He had always been unique, I think that is the phrase most people used to describe him! When he first started school at four, both his headmistress and his class teacher said they had never met a child like him before, which they said was both good, and not so good. He’s always had great over-reactions to things, he’s always been very intense, non-stop questioning, he’s always been able to see through things, and wanted to question things until he gets to the absolute bottom of things, and not be fobbed off in any way, shape or form.
I always remember a standout moment, not long after he had started school when he was only four and a bit. They had been saying some prayers at school and he asked me in the car who God was. I was very proud of myself for not saying what my own opinion was, but putting different points of view. After about a minute he said, ‘I don’t want to know what everyone else thinks Mum, I want to know what you think.’

But over time, as school got more demanding and other children matured at different speeds to him, his differences stood out more and more. Initially, it was only me that felt there was an issue. My sister, who is a GP, and my husband said ‘Oh, he’s just a boy and he’ll be fine’. It was only when, at the age of eight, he started suddenly not sleeping, that the wheels came off really, for everybody. It was only at that point that we went down the route of a diagnosis. He was given multiple labels, so he was diagnosed with Aspergers, ADHD (Attention deficit hyperactivity disorder), SPD (Sensory Processing Disorder) and extreme anxiety. Bits of all of them were right, but not all of them, and it just seemed to be far too many labels to give one child.

And then it was the Special Educational Needs Coordinator (Senco) at the school that we moved to who, after quite a long time, she first raised the possibility of PDA (Pathological Demand Avoidance), which is a very atypical form of Autism, which seemed to make a lot more sense, he ticked a lot more of those boxes than he did for his previous multiplicity of labels.

But still, that didn’t really explain what was going on, and though I always knew he was bright, it wasn’t until the Senco at his school did an IQ test this year that I knew how bright he was. So then I looked into giftedness, and came across the term twice-exceptional, and that made more sense. I was a bit worried about whether he might have been misdiagnosed once I understood about many of the things that went alongside being bright, in terms of asynchronous development and OE (overexcitabilities), as I now know they are called.

I googled a lot about being twice-exceptional, and found there was a lot of information in the States, but didn’t seem to be much here. I was interested to see how I could communicate all of this to my son’s school. And I think on one website that I found, there was a list of experts, of which there was only one in the UK! And so I got in touch with PowerWood for that reason.

The initial chat that I had with Simone made a lot of sense. Obviously, along the way, I’ve talked to psychologists, psychiatrists, child psychologists, educational psychologists, occupational therapists, Sencos… all these supposed experts. And nobody had ever made much sense to me. I feel now, that to understand these children well, you have to have had one yourself because otherwise, I don’t think you can have that level of insight and understanding.

As my son had been diagnosed with many things before, when I first came across PowerWood, he said, ‘well Mum, you do all your reading, and then when you are absolutely sure that’s what I am, then talk to me about it’. So when we did have a chat about being Over Excitable, and whereas normally he would be very dismissive, he was very quiet. And again, it just seemed to make a lot of sense for him and helped him to understand why on the one hand he could be quite an intelligent chap, but on the other find life extremely difficult.

Talking with Simone gave me some confidence that I was talking to someone who made sense to me for the first time since my child had been born. That was quite reassuring, but also a little upsetting that it had taken that long to find someone who made sense. Lots of things made lots of sense – for example, the term ‘asynchronous development’. Whilst I’d always understood that my son was at different ages, depending on whether it was intellectually, emotionally or behaviourally, I hadn’t been able to describe it in those terms. He would call himself stupid because he would compare himself to other children, and think, ‘Why don’t they get so upset about things? Why don’t they feel things in this extreme way?’ So I think it helped him to accept himself a bit more, and have an explanation for some of the things that he found very difficult.

He has always not enjoyed writing, and we always thought that was to do with demand avoidance, controlling behaviour. He always enjoys class discussions, things like that, but isn’t terribly keen about writing. Simone suggested dysgraphia, which I had never even heard of. I researched it and found somebody who could assess that for him and – lo and behold – that was viewed as being extremely likely. Instead of insisting he does things, it was about understanding more about what might be underlying some of his difficulties, rather than just awkwardness or demand avoidance.

So I think it’s helped me to have a lot more insight and understanding into my son, and that’s given me more confidence in helping advocate for him at school. And also given me confidence that I had been along the right lines all along, but hadn’t had a peg to hang it on. This gave us a framework to make sense of some of the things I had worked out, but didn’t necessarily have the confidence to think I was on the right lines.
Another of Simone’s phrases that made sense was being ‘unconsciously competent’, which I quite like.

However much all children are unique individuals, some of these children are a lot more unique than others. I think the biggest thing for me has been finding someone who could help make sense of it, and who I felt was talking sense. Because other things hadn’t. I had been on a quest really, to try and understand my son in a way that I could also explain to other people.

One thing that has helped on a very practical level is that we discussed – I homeschooled him for a while when his school placement broke down, and I learned a lot about the way he learns. He needs to learn in a top-down way, rather than bottom up, building blocks as most primary education is. And when I discussed that with Simone, she said it is about him needing things to be placed on his ‘concept tree’. If he doesn’t understand the overall framework, as to why, and what’s the point, and where does this fit with life, then you can’t start teaching the little things that you might want to hang on that tree. First, you must explain the tree. Simone explained it in terms of, a lot of children can do it, because they’ve been shown, and therefore they just do what’s been shown, without necessarily really, really understanding what it is that they are doing. Whereas my son needs to understand exactly. Now, instead of getting all tizzy because he can’t do something, he is much more likely to say, ‘Actually, please could you put that on my concept tree?’

The main thing to come out of it, is really the sense that I am not alone. That there are other children out there who are similar to my son, and other parents who are going through similar things too, that I’ve gone through, and finding your tribe – speaking with somebody who just makes sense, because they are saying things you can only say when you have had a child that is similar. Reassurance that I have been on the right lines all the way through, even though I didn’t know that I was, or what any of those things were actually called.

People debate about labels, and whether or not labels are helpful for children in terms of diagnoses, they are in terms of signposting, in terms of accommodations and interventions that are going to work for them. I’m quite a ‘word person’ so for me, to be able to sum something up that would otherwise take me 500 words to explain has been quite beneficial. It’s a complex thing to get your head around, even if you have got the right terminology to use. Giftedness is not something that is very openly discussed in this country. It’s work in progress.