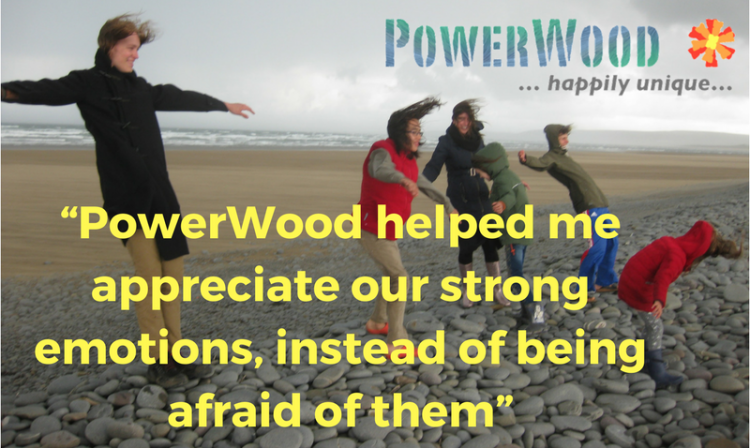 Children’s names have been changed

Why did you first approach PowerWood?

My six-year-old son has always been highly strung emotionally. He has a strong sense of justice so if he can’t understand the reason for a rule or why he’s told he can’t do something – take his football trophy to church, for instance – he can get extremely angry. When Evan’s angry he’s very physical – he screams, throws things, hits out and cries. I’d got to the point where I was worrying about how dangerous his behaviour could be.

We’d tried all the normal parenting techniques, like stickers and the time-out step, but nothing worked. Some family members suggested giving Evan ‘a good slap’ but I was sure that wouldn’t teach him anything in the long term.

Evan’s always behaved and performed well at school and his teachers told me it was normal for bad behaviour to come out at home. But I don’t think that should be normal – family life is far more important than school.

A friend of mine whose son had a similar personality to Evan had picked up a PowerWood flyer at a homeschooling conference in London. I recognised Evan straight away when I read about OEs. For example, when you’re reading to Evan he always has to be doing something, like squeezing or throwing a ball. I used to find this frustrating, thinking he wasn’t listening, but actually when you’d ask him a question you’d realise he’d taken everything in. Understanding psychomotor OE helped me make sense of this.

How has PowerWood helped your family?

PowerWood has helped me understand what’s going on, and given me useful tools.

I realised during my Skype sessions with Simone de Hoogh that not only does my son have OEs but that I do, too. My own emotional OE was contributing to my stress because I wanted to please other people by being this perfect parent I had a mental image of. I’m learning to let that go, to take care of my needs and appreciate my successes.

For example, I used to get stressed about us being late for school, but now I remind myself that that nothing bad will happen even if we are late, despite the school’s ‘late mark’ system. When my dreamy 4-year-old daughter is talking endlessly and taking forever to eat her breakfast, I notice my internal stress but repeat a mantra to myself, ‘we’ve never been late, it’s okay, and even if we are it doesn’t matter’. I think this is helping my children be calmer, too.

And I’ve started trusting my son a bit more. I’m finding that Evan gets ready quicker if I don’t hover near him when he’s getting ready in the mornings. And when he wants to do something like cut vegetables on his own, I don’t automatically say, ‘No, the knife’s too sharp’. I get him involved more, ask him for help.

I listen to Evan more, too. Even if my ‘No’ will still be a ‘No’ afterwards, it helps if I let him say why he wants to do something or explain why he’s upset.

And just understanding about OEs stops me worrying about little things like Evan getting up and down from the table all the time. In fact, I find myself creating opportunities for him to move.

Has PowerWood changed the way you deal with your children’s meltdowns?

Definitely. I know now that there’s no point trying to talk to one of my children when they’re having a tantrum – nothing goes in then. I need to wait until they’re calm, maybe helping that happen by giving them a hug. I’ve noticed this really stirs other parents. They can’t believe I’m giving a ‘disrespectful’, tantruming child a hug.

I recognise that a large part of the solution is working on myself. I don’t want to be a shouty mummy. I’m learning to manage my own anger. Sometimes when Evan’s having a tantrum I tell him, ‘I need to walk away for a minute to calm down’.

Once everyone’s calm, then we can talk about what led up to the meltdown – when I know what I’m saying is sinking in.

Understanding OEs has also helped me deal with challenging situations like bedtime more creatively. I’m a logical, step-by-step person, but learning how to appeal to my 4-year-old daughter’s imagination by saying things like, ‘Panda’s ready for sleep’ is fun and helpful.

What’s the biggest challenge about parenting a child who has OEs?

One of the hardest things is dealing with other people’s reactions. I mentioned before how shocked other parents are when I give my daughter a hug when she’s having a tantrum. When you do things differently it’s easy to question whether you’re doing the right thing. But I’m learning how important it is to trust my instincts instead of being driven by how society or other families do parenting.

How do you feel about your family’s OEs now?

These days when we’re going through a bad time I can say ‘Let’s just ride this phase out, things will calm down again,’ instead of worrying that Evan’s going to turn into a delinquent 16-year-old. It’s such a relief not to have to fear his meltdowns and to know there’s nothing wrong with myself or my children.

With Evan’s intensity comes a great willingness to learn – he’s like a sponge – and a lovely desire to look after his sister. PowerWood has helped me to appreciate and nurture everyone’s strong emotions, instead of being afraid of them.