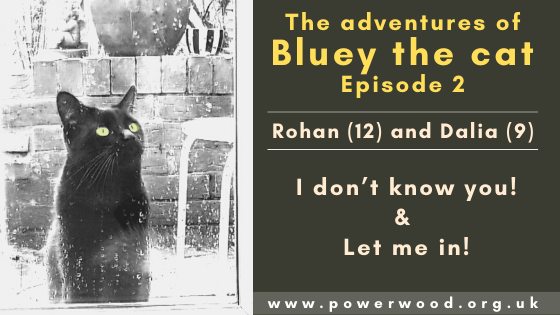 Hello everyone – guess what! We’re back, and so is Bluey! This week we will be giving you stories of some of Bluey’s classic behaviours. We hope you enjoy it! And remember, if you want regular Bluey cuteness, follow his Instagram @bluey.the.cat.

I don’t know you!

One of Bluey’s strangest habits is that whenever we see him hanging around the area outside our house he always pretends he doesn’t know us, and runs away, but whenever he is in the house, he is always trying to be around us. One time, we had just returned from visiting the local park, when we saw Bluey sat around on the pavement, watching our friends’ cat walk up the street, and we went to stroke him. As soon as we got near, however, he meowed and ran off. We called him and he came back a bit closer, but our friends’ young cat (some might still classify it as a kitten) came right up to us as if he remembered us. Bluey then returned, but the other cat ran away, and then so did he. We kept calling him for ages, but every time, our friends’ cat came instead. Eventually we had to herd the other cat back to its house, because we were scared it would get hit by a car as it was still so young. We returned, and shortly later, Bluey came in and started asking for a cuddle. We concluded that Bluey was most likely embarrassed to see us out in his domain! This has happened so many times.

Every day, Bluey goes outside, and every day, Bluey comes back in. But most of the time he forgets how to use his cat flap (that or he’s just very lazy) and tries to use the human door. He scratches at the door when he wants to get in or out, even though he has a perfectly good cat flap. About 2 weeks ago, it was raining, a lot, and Bluey didn’t like it. We had recently given him a cushion to sit on outside – it was under shelter –  when it was sunny, he’d lie down on it for a lot of the day, and was very surprised when water started falling out of the sky, he sat out there for 10 minutes, before realising that it was no longer warm and returning inside. He began to scratch at the door, but we told him to use the cat flap instead – he obviously didn’t understand us because he is a cat, so eventually we let him in. As soon as we let him in, however, he began begging to get out again! We let him out, but then he started scratching to get in again; this carried on for some time (us letting him in, but him trying to get out again and vice versa) until, after all of that he finally decided to stay outside!

I hope that you have enjoyed this issue of the adventures of Bluey, and that the tales of his ridiculous cuteness have entertained you.

During these challenging times PowerWood facilitates access  – also to non-members – to all information, tests, strategies and tools.

PowerWood offers to (self)-isolating families understanding, simple tools and strategies that enable us and our children to support ourselves and our children through emotional overwhelm. If you enjoy reading the articles please support PowerWood by becoming a PowerWood Community FreeBee or Friend member. Thank YOU!