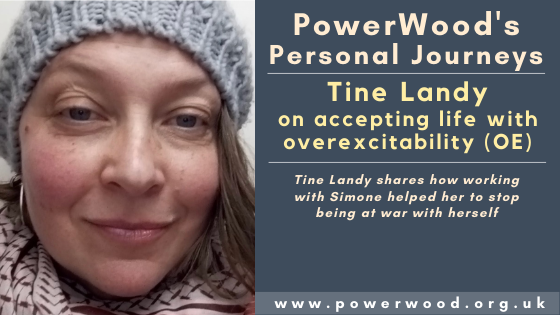 For as long as I remember I have had a feeling of being different. I had other interests to my family and friends, I seemed to pay attention to different things than most people, and I seemed to deal with stress and upsets differently. I also seemed to get upset about things that didn’t seem to matter so much to  most of the people that were in my life, and found it harder to let things go than many around me. Over the years, I have engaged in many forms of personal development, but it was meeting Simone when my eldest daughter was six years old that would lead to the most profound and long-lasting change for me. A change in how I respond to events in my life, and also a change in how I relate to myself. From being at war with myself, I have learned to embrace who I am, and accept that in certain ways my life, and the way I need to manage my days, is quite different from the way most people live theirs.

Growing up, I lived in the countryside in Denmark. We had a big main road that ran maybe 200 meters from our house. I remember being around eight years old, sitting on our little hill and feeling disturbed by the cars that drove on the road, and I remember looking at the farmer’s fields, worrying about the pesticides being sprayed.  The presence of the pesticides made me feel as if nature wasn’t real, where we were. I worried a lot about things being real, so much so that when I became older and tried to wear make-up, it made me feel fake. I liked to play pretend games of living “in the olden days”, when cars weren’t around and you had to repair your clothes. Looking at it now, I was quite environmentally concerned, but it wasn’t a conversation that existed in the 70s Denmark I grew up in. I also remember finding it easier to connect with grown-ups than children my own age, though I did have friends. I just found it hard to be completely me, as I couldn’t find anyone who really saw life the way I did.

As a young person I struggled a lot. I had life circumstances that were very difficult, and I struggled with finding my place in the world, given my personality. Don’t get me wrong, I had friends, I got an education, I travelled, and eventually I got married and became a parent. Though, while doing all of that, my inner life was a constant turmoil. I always felt out of place, and I always had an inner life that took up so much energy.

A lot of life was lived between being a child and becoming a first-time mum at the age of 37. Lots of good things had happened – and lots of hard things too. Becoming a mum was the best thing that ever happened in my life. I had wanted to be a mum since I was 24, but as it turned out, I had to wait quite a few years. Becoming a parent was an intentional choice, and little did I know that it was the beginning of a very hard journey that involved a steep learning curve.

My child was, of course, the most beautiful child of all, and she was also the most active and independent child. When she was five months’, old she started crawling, and she was forever on the move. When she was four, she became a big sister to an equally beautiful little sister, who was equally as headstrong, but who didn’t leave my hip for three years. Oh my, those two, we had so many fun times together, but there were aspects that were incredibly hard.

Fitting in the box

Sleep was not a big thing for one child who was independent and constantly active, and the other needed constant reassurance that I was there, and would never leave my side. I was busy and I felt that I was failing as a mum, as at that point I was still waiting for and trying to create the normal routines that other families seemed to be able to create. But my children did not seem to fit into the kind of boxes that most other children seemed to fit into. They were both brilliant, but I often felt judged, for one being too active and the other being too attached, with all the things in between that this entailed. So now I had my own inner world to cope with, plus the responsibility for these two beautiful beings, and the combination stretched my ability to cope. I wanted to be the best parent I could, and I did my best, but I so longed for inner peace while going through this precious time of my children’s life.

Then, when the eldest was six I found a talk by Simone, all by accident, and the rest is history, as they say.

Some of the things that especially spoke to me in Simone’s workshop was the way she talked about emotional overwhelm, constant worry, excess energy, different sleep patterns, and I seem to remember that asynchronous development came up, too. This is when a person’s emotional, practical and intellectual abilities don’t develop at the same pace, as is for instance often the case with highly able children. They might be “way ahead” intellectually, but emotionally they’re maturing slower than the generally expected age milestones.

Sitting in that workshop I felt that Simone was holding up a mirror to our family, and I suddenly felt understood at a level that I had never met before.

What have I gained throughout the years?

So many things fell into place that afternoon, and initially it was great to recognise myself and my family. I had been introduced to concepts that made me slightly more grounded, which took off some of the pressure I felt to live up to certain expected standards of how a family is “supposed” to be. I did, however, still feel like it was a burden we had to live with. I was still hoping to find a short cut that would make us live a so-called normal life. I had a whole world created in my mind – read world created by my imaginative overexcitability – and I could not get reality to fit to this.

Throughout the years since then, PowerWood has been part of our lives. We went to camps when these were happening, and on and off since then, I have had coaching sessions with Simone.

Reflecting back, I can see that these sessions have created a kind of awareness dance between understanding myself and my children better, and learning to be kind and gentle to myself and accept myself for who I am. This, rather than being at war with my intense personality, my sensitivity to light, sound and touch, my tendency to ruminating thoughts and the way my emotional overexcitability, without awareness, has controlled the way I have been interacting with people, and allowed for behaviour in them and me that hasn’t strengthened the connection.

It’s hard to put into words, everything I have gained. It has been almost ten years of self development and learning tools, and I’ve spent a lot of the years since, to come to an acceptance of living with overexcitabilities and a challenged nervous system.

Things I have learned from being in the PowerWood community and from my coaching sessions with Simone:

It has been a journey on which I have gained awareness about strengths and challenges in overexcitabilities, which has helped me change my perspective from tolerating them to actively using the strength in each to enhance whatever circumstance I am finding myself in.

I have gained so much, and I find it really important to help others that also aim to achieve a similar experience – who are on the road from struggling to embracing the beauty that is possible in a life lived with overexcitabilities.

During these challenging times PowerWood facilitates access  – also to non-members – to all information, tests, strategies and tools.

PowerWood offers to (self)-isolating families understanding, simple tools and strategies that enable us and our children to support ourselves and our children through emotional overwhelm. If you enjoy reading the articles please support PowerWood by becoming a PowerWood Community FreeBee or Friend member. Thank YOU!